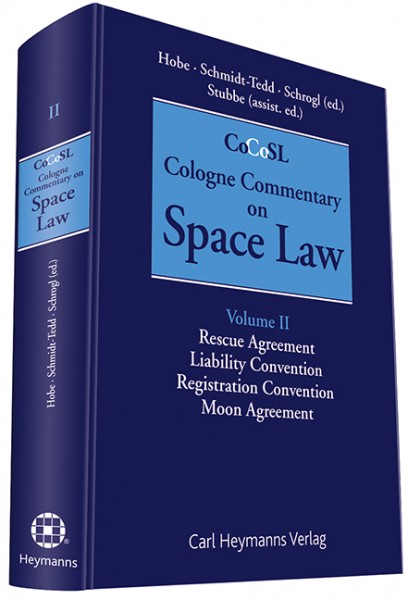 Volume II comments on four UN Treaties of international space law: the 1968 Rescue Agreement, the 1972 Liability Convention, the 1975 Registration Convention and the 1979 Moon Agreement. Experienced authors from various countries representing different legal traditions elaborated on these four agreements which were concluded after the 1967 Outer Space Treaty. Many of the provisions and concepts of the Outer Space Treaty are further developed by the subsequent treaty law that is addressed in this book. The interpretation of the basic legal norms provided by Volume I, which comments on the Outer Space Treaty, thus constitutes a foundation for the commentary in Volume II.

The International Academy of Astronautics in 2010 awarded its Social Sciences Book Award to the Editors of the Cologne Commentary on Space Law for Volume I and thereby acknowledged the outstanding proficiency of the publication.

In building on the successful commentary approach of the first Volume – which is unique in space law literature – the second Volume also provides a provision by provision interpretation and highlights the historical background and context for each of the four Treaties. It includes insights into the subsequent State practice, the present-day applicability and future perspectives of the Treaties.

Content Overview Volumes I and III:
Volume I serves as the foundation upon which Volumes II and III of the Commentary build. It comments on the Outer Space Treaty which represents the first international space treaty that lays down the basic principles for the activities of states in outer space. Volume III will discuss the six most relevant United Nations General Assembly Resolutions on space law, namely: · the 1982 Direct Broadcasting Principles, · the 1986 Remote Sensing Principles, · the 1992 Nuclear Power Sources Principles, · the 1996 Space Benefits Declaration, · the 2004 Launching State Resolution and · the 2007 Registration Practice Resolution.