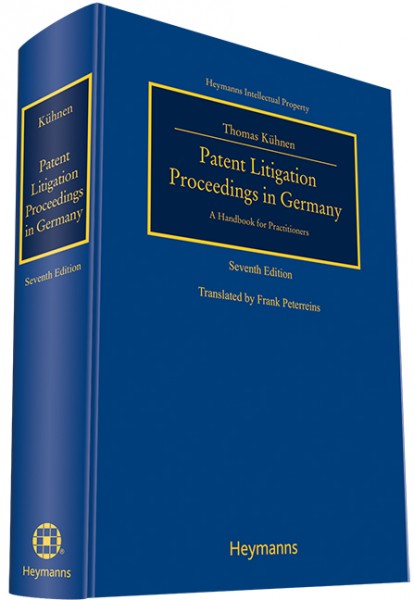 A Handbook for Practitioners
translated by Frank D. Peterreins

The book »Patent Litigation Proceedings in Germany« is an English translation of Honorable Judge Kühnen's book »Handbuch der Patentverletzung« containing a detailed discussion on the German case law in patent litigation matters. The German version of his book on Patent Litigation Proceedings is one of the most excellent sources for German practitioners in case of legal questions.

German patent litigation courts are constantly enjoying an increase in popularity on international level. Swift decisions with foreseeable results at reasonable costs are essential reasons for their success. The famous disputes between the giants of the mobile phone and smartphone industry are only one particularly prominent example which got a lot of attention. In Düsseldorf, which is still the most important German jurisdiction for infringement actions, about 60% are non-German parties which are involved either as plaintiffs or as defendants. Already in preparation of patent litigation proceedings, non-German clients want to be informed by their counsels about the practice in Germany. This does not only concern general information regarding costs and probable duration of the proceedings; the requested advice needs to be the more detailed the more important the envisaged lawsuit is for the concerned company and its market position. In many cases, questions with respect to the German substantive and procedural laws need to be discussed already in the pre-trial stage of consultation. In the course of the proceedings, there will commonly be a further need for information. Occasionally, it is in the interest of the non-German plaintiff or defendant to get an idea of the German patent litigation procedure in order to independently evaluate the chances and risks and to carefully consider the possibilities of an infringement action or a legal defense.

All this is certainly not possible in German language, which, by nature, cannot be understood by non-German clients. In order to make German patent infringement system better accessible to non-German clients, the publication of an English edition of Honorable Judge Kühnen's German book on Patent Litigation Proceedings in Germany (Handbuch der Patentverletzung) suggested itself.

Authors:
Honorable Judge Dr. Thomas Kühnen is one of the most prominent patent litigation judges in Germany and in Europe. In Europe, most patent infringement actions are filed with the District Court in Düsseldorf, a major part of these cases are appealed to Upper Regional Court in Düsseldorf where Honorable Judge Kühnen is the Presiding Judge of the Patent Senate.
Dr. Frank Peterreins is the Managing Principal of Fish & Richardson's Munich office. He is qualified in Germany as an attorney-at-law and a patent attorney and is also a European patent attorney, and has a wide-ranging litigation practice including EPO opposition cases and German nullity cases. Before becoming an attorney, Dr. Peterreins was a patent examiner with the European Patent Office and a member of an EPO Opposition Division.