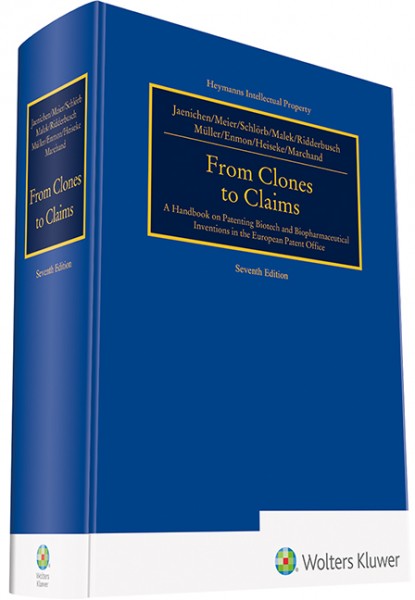 »From Clones to Claims« has evolved as a reaction to the ready internet availability of all decisions of the Boards of Appeal of the European Patent Office (EPO). While the increased availability is one thing, using the information in daily practice is another. This translation is the aim of the 7th edition of this book. It has become a guide through the available decisions not only of Boards 3.3.04 and 3.3.08 – the initial biotech Boards – but also of Boards 3.3.01 and 3.3.02, which have meanwhile also begun to hear biotech cases. This reflects the overwhelming development and expansion of biotech into the field of biopharmaceuticals, for example, the advent of antibody drugs against several types of life-threatening cancer and chronic diseases, such as rheumatoid arthritis. One of the best current examples of the importance of biopharmaceuticals was the virtually immediate advent of powerful vaccines against the causative agent of the corona (SARS-CoV-2/Covid-19) pandemic. »From Clones to Claims« contains extra chapters on the patenting of viruses – and related vaccines. This is just one example of the chapters in the expanded version. This 7th edition also contains other supplemental chapters in view of recent developments in science and related jurisprudence. For example, new or substantially revised chapters include a new, more elaborate chapter on SPCs; a new chapter on plausibility, with express consideration of pending case G 2/21; as well as new chapters on next generation sequencing technologies and personalized medicines/companion diagnostics. A further new chapter addresses CRISPR, outlining and discussing the complex pattern of oppositions and appeals in the EPO concerning this revolutionary, Nobel prize winning technology. Thus, the current jurisprudence of the Boards of Appeal of the EPO is systematically organized according to the following topics:

As is evident, this expanded version of »From Clones to Claims« solely focuses on EPO Appeal Board jurisprudence and SPCs. It no longer addresses jurisprudence from the US or Japan as a consequence of the technically limited space in such a product. Thus, the new version is a detailed guide on how to prepare European patent applications in any particular field of biopharmaceuticals and how to best defend the European patents once granted. Given this, the book is not only useful for advanced practitioners, but also for beginners as an introduction into and an orientation to the field of biotechnology patents.

Given the book's clear language and systematic structure, the EPO's jurisprudence is immediately accessible for specific areas of daily practice. For instance, if the question arises as to what extent stem cells, viruses, vaccines, antibodies or plants can be claimed and how enablement, novelty and inventive step of such claims are routinely assessed by the EPO, separate specialized chapters of the book can be consulted.